NAIRAS is composed of coupled physics-based models that transport cosmic radiation through the heliosphere, Earth’s magnetosphere, the neutral atmosphere, and aircraft or spacecraft shielding. GCR are propagated from outside the heliosphere to 1 AU (astronomical unit) by solving a steady-state, convective-diffusive transport equation including adiabatic energy loss. A hybrid version of the Badhwar and O’Neill 2010 model, denoted H-BON10, was developed for NAIRAS to solve GCR heliospheric transport. The GCR composition in H-BON10 was also extended to include primary nuclei from hydrogen through uranium for predicting linear-energy transfer (LET) spectra out to 100 MeV-cm2/mg for SEE assessment. Transport through the magnetosphere incorporates the dynamical response of the geomagnetic field to space weather variability in the interplanetary medium using the CISM-Dartmouth vertical geomagnetic cutoff rigidity model. Transport of cosmic radiation through material media – i.e., the atmosphere and/or aircraft or spacecraft shielding – is calculated with the deterministic HZETRN transport code.

Thus, the NAIRAS model computes ionizing radiation particle flux spectra from the primary sources (GCR, TRP, SEP) and the secondary radiations produced from nuclear interactions between the radiation source ions and the constituents of the intervening material media. The secondary particles consist of heavy-ion fragments from GCR ions and protons, alphas, pions and muons, and electromagnetic cascade particles (electrons, positrons, and gamma ray photons) produced by interactions with the radiation source ions. The particle flux spectra are the fundamental physical quantities from which important response functions are calculated, such as dosimetric quantities and the various flux and fluence quantities useful for characterizing SEE.

NAIRAS version 3.0 operates in two independent modes: (1) real-time global predictions of the atmospheric radiation environment, which are updated hourly, and (2) run-on-request (RoR) capability allowing the user to select a specific time-period for the global dosimetric calculations, or to upload an aircraft, balloon, or spaceflight trajectory file to provide simulations of the dosimetric and radiation flux and fluence quantities along the flight path.

The key features of the real-time NAIRAS operation mode: (1) global maps of the atmospheric ionizing radiation environment provided at an hourly cadence on a 1x1 degree latitude/longitude grid, 0-90 km in altitude at 1-km increments; (2) both GCR and SEP sources of atmospheric ionizing radiation are included in real-time; (3) radiation transport through material media is physics-based using the deterministic HZETRN code; and (4) the temporal and spatial variations in geomagnetic transmission of GCR and SEP primary particle spectra due to coupling between the magnetosphere and the interplanetary plasma environment are also included in real-time. The output dosimetric quantities are absorbed dose in silicon, absorbed dose in tissue, dose equivalent, ambient dose equivalent, and effective dose.

The RoR capability allows the user to run the NAIRAS model for customized application scenarios and time periods. These features are summarized in the table below. The global dosimetric run option mirrors the execution of the real-time mode of the NAIRAS model for a user-specified time-period. The input is simply start and end datetime for the model run. The output quantities are the same five dosimetric quantities provided by the real-time model. Hourly output files of the dosimetric quantities calculated at each model grid point described above are written out over the duration of the user-input start/end datetime interval. This class of run option capability provides global context and situation awareness of the atmospheric ionizing radiation environment. Furthermore, retrospective scientific analysis and verification and validation of the real-time mode of operation of the NAIRAS model can be readily performed. 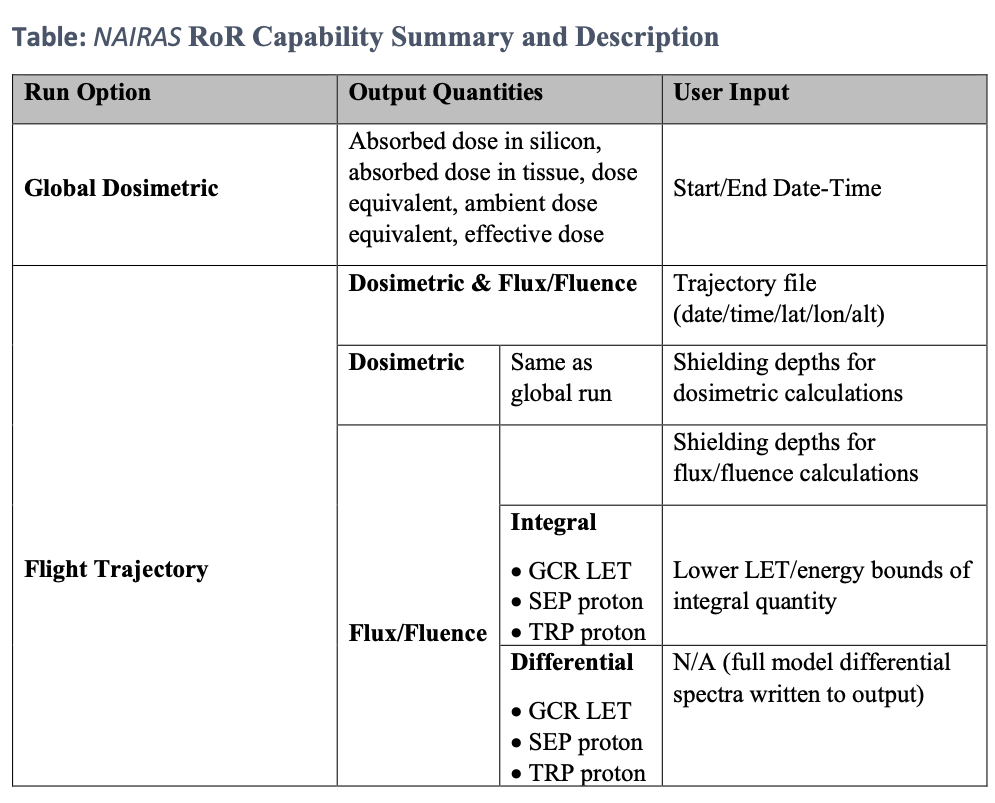 Northern and southern hemisphere maps of dosimetric quantities for the latest hourly prediction. The user can select prior hourly predictions going back to year 2020 when NAIRAS became operational at iSWA. The user can select five dosimetric quantities: absorbed dose in silicon, absorbed dose in tissue, dose equivalent, ambient dose equivalent, and effective dose. The user can select four barometric altitudes for displaying the dosimetric quantities: 5 km, 11 km, 15 km, and 40 km. The cruising altitude of small aircraft and commercial flights are largely bound by the altitude range 5-11 km. Corporate aircraft cruising altitudes are typically between 12-15 km. The highest altitude of 40 km provides a reasonable proxy for free-space ionizing radiation exposure behind the typical shielding of an aircraft/spacecraft, which when converted to an equivalent atmospheric depth corresponds to ~ 40 km in the U.S. Standard Atmosphere. A global map of the vertical geomagnetic cutoff rigidity for the latest hourly dose predictions is also available for viewing. A vertical slice of the dosimetric quantities for a commercial flight from New York to Seoul is available as well.