The integrated Space Weather Analysis System (iSWA) was developed to resolve a critical agency challenge: to accurately specify and forecast both the large‐scale and local space environments and their probable impacts for NASA missions. The iSWA system also addressees the technical challenge of presenting actionable space weatherdescribes the variable conditions in space, due to solar activity and the solar wind [[Glossary/ space weather]] information in a form that is both easily accessible and useful to the NASA customer.

Development of the iSWA system has been a joint activity between NASA HQ Office of the Chief Engineer and NASA Goddard Space Flight Center ( The Applied Engineering and Technology Directorate, and the Science and Exploration Directorate ). ISWA is situated within and based on the Space Weather Laboratory's Community Coordinated Modeling Center (CCMC), which provides real‐time forecasts using the most advanced space weatherdescribes the variable conditions in space, due to solar activity and the solar wind [[Glossary/ space weather]] models currently available. CCMC is supported by the Heliophysics Division at NASA/HQ and by the National Science Foundation. 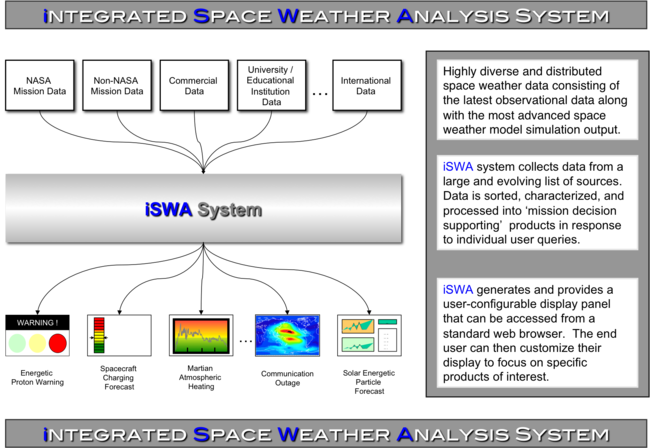 The iSWA System Architecture page outlines the core componets that power the system.

All consumable iSWA system data products are refereed to as "cygnets". Each cygnet conveys specific space weatherdescribes the variable conditions in space, due to solar activity and the solar wind [[Glossary/ space weather]] data or information for a specific region, effect, or measurement. The cygnets can be organized into categories or browsed collectively using the iSWA cygnet selection panel.

Example Save Layout/Bookmark Feature Version 2 - Saves the time and mode of each cygnet - This allows users to easily save custom analysis layouts for various time-steps.

Why is iSWA not working properly after a version change?

NOTE: iSWA generates URLs whenever the "Save Layout" or "Clear" buttons are selected. If the resulting URL contains the "8080" port specifier, simply remove that portion of the URL and reload the page.

Please be aware that iSWA is developed and performance tuned to operate on port 8080 and using the http://iswa.ccmc.gsfc.nasa.gov/IswaSystemWebApp URL may result in slightly slower load times.

Are there any backup or alternative iSWA access points?

NOTE: The two main access points provide load-balancing and automated failover capabilities for iswa services. You may notice in the title bar of your iswa system web app page a specific "iswa node name" is listed. In some instances, a specific node can be accessed directly, but this behavior is discouraged.

Another feature of interface is the download/export button that links to a pre-encoded mpeg4 movie file of the current cme event for users to download.

Ovation Prime: is a new-generation precipitation model (Newell et al., 2010) that is driven by an optimized solar windplasma flowing out from the sun [[Glossary/ solar wind]] coupling function (Newell et al., 2007). This model includes seasonal variation and separates different types of auroras: monoenergetic, wave, diffuse, and ion auroras. Here we sum all the types together.

NOTE: The 171,193,and 304 wavelengths are space weatherdescribes the variable conditions in space, due to solar activity and the solar wind [[Glossary/ space weather]] products with higher update intervals.

References and relevant publications
Horton, W., and I. Doxas (1998), A low-dimensional dynamical model for the solar windplasma flowing out from the sun [[Glossary/ solar wind]] driven geotail-ionosphereAn atmospheric layer in which a small fraction of electrons have been separated from their parent ions by energetic processes. Solar photons, solar protons and auroral particles, with sufficient energy, strip the electrons to produce a weak plasma. [[Glossary/ionosphere]] system, J. Geophys. Res., 103(A3), 4561-4572.

NOTE: A future feature will be added to the system allowing users to quickly identify the "state" of a cygnet.