Please note that some pages may have moved during the migration. If you experience any issues with the new website, please reach out to gsfc-ccmc-support@lists.hq.nasa.gov.

The 3-D reconstruction technique incorporates a kinematic solar wind model and tomographically fit this to SMEI Thomson scattering brightness observations (Jackson et al., 2008). The SMEI time-dependent tomography provides densities at nearly three-times better resolutions in space and time than the IPS. The SMEI analysis allows the 3-D reconstruction of CMEs and other heliospheric structures such as corotating interaction regions (CIRs). The SMEI analysis incorporates IPS velocities when these data are available, and allows their presentation along with density. 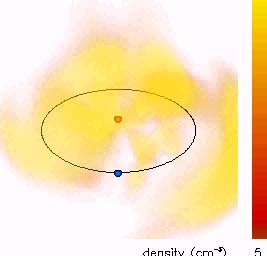 Solar wind density and velocity throughout the inner heliosphere.