This site presents initial results from computer simulations of the near Pluto Solar wind environment for the time period of the New Horizons Spacecraft flyby. Results are presented from models that range from a simpler 1D gasdynamic approximation, a 2D magnetohydrodynamic(MHD) simulation that includes passage of nearly 120 interplanetary coronal mass ejections, and 3D multi-fluid and 3D multiscale Fluid-Kinetic MHD models. Click on the caption in the slider for detailed results from and information about each model.

Results from a 1D gasdynamic model of the Solar Wind propagating from the inner heliosphere to Pluto from Peter MacNeice and Nathan Schwadron.

This model solves the 1D gasdynamic equations for the Solar Wind. It includes estimates for enhancement of the wind mass density due to photoionization of neutral hydrogen entering the heliosphere from the interstellar medium. It also includes the drag effect and associated heating of the wind caused by charge exchange between protons in the solar wind and the neutral hydrogen (producing the so called Pick up ions). These source terms for these effects are implemented as in Schwadron et al (2011), Ap.J. volume 731:56. The distribution of neutral hydrogen has been set in accordance with the analysis of New Horizon SWAP measurements reported in Randol et al (2012), Ap.J. volume 755:75.

The left panels show the wind evolution as a function of radius. The vertical blue line indicates the radial location of Pluto. The right panels show the wind properties as a function of time at Pluto. The blue dot indicates the value at the time of the New Horizon flyby. This simulation is driven by the OMNI measurements of the Solar Wind in the 'near Earth' environment at 1AU. These observations have been shifted in time to account for the time varying difference in heliospheric longitude between the Sun-Earth and Sun-Pluto directions.

This second graphic shows results from the same model, but with the addition of an estimate of the additional heating due to dissipation of turbulent fluctuations in the magnetic field and solar wind velocity. These affects are modeled following the description in Adhikari et al (2014), Ap.J. volume 793:52. In this case we include the additional driving of the turbulence by the Pick Up ion population. This graphic shows results for the case in which this term is most effective, i.e. where the fraction of the pick up ion energy transferred to excited waves is largest (fd=1.0) and full mixing of incoming and outgoing waves (Γ=1.0).

The third graphic shows a similar view as the second, but in this case the timelines shown in the right hand panels record the solution at the location of the New Horizons spacecraft.

The animations below illustrate the prediction of the solar wind parameters at the New Horizons spacecraft during its cruise phase to Pluto. Numerical simulations of more than 120 Coronal Mass Ejections (CMEs) during the past six months were performed using the heliospheric code ENLIL (Sumerian god of wind), developed by Dr. Dusan Odstrcil. ENLIL is implemented at the Community Coordinated Modeling Center (CCMC) located at NASA GSFC and utilized by NOAA Space Weather Prediction Center (SWPC) in operational space weather forecasting. Kinematic parameters of all CMEs are measured and stored in the web-accessible Database Of Notifications Knowledge Information (DONKI) by the CCMC's Space Weather Research Center (SWRC) team, while continuously monitoring space environment conditions in inner heliopshere in support of NASA's missions. Application to the outer helioshere is beyond the model's current capabilities and this simulation serves as an estimate. Solar wind would need around 4-5 months to propagate from the Sun to Pluto. All CMEs fitted by CCMC/SWRC in the last six months were used by ENLIL to estimate the disturbed solar wind parameters up to four months in the future. Although inaccuracies in the arrival times can be 2-3 weeks, this simulation estimates that Pluto might be immersed in a rarefaction region with very low solar wind densities, lasting for about one month, followed by a large merged interaction region in which a large increase of the ram pressure may significantly compress Pluto's atmosphere. In-situ measurements by New Horizons would provide important information toward sophistication and calibration of this and other heliospheric models.

Principal Investigator Dusan Odstrcil leads an effort to develop the "next-generation ENLIL code". This work is sponsored by NASA Living With A Star (LWS) program and supported by NASA/CCMC.

The animations below show that a similar concept for space weather prediction with ENLIL can be applied to other NASA missions at the outer planets, such as Cassini and Juno.

The plot below shows preliminary results from a three-fluid 3D simulation using the global solar corona and solar wind model described in Usmanov et al. (Astrophys. J., 788, 43, 2014). The output from the model is a steady-state solution in the rotating frame in the region from the coronal base to the outer heliosphere. The synoptic solar magnetogram for Carrington Rotation 2161 (February 28 - March 27, 2015) from Wilcox Solar Observatory was used for assigning boundary conditions at the coronal base. The plot shows computed variations of flow, magnetic field and turbulence parameters along the New Horizons spacecraft trajectory from July 2 to July 28, 2015 in the heliographic coordinates. The trajectory data are from OMNIWeb. 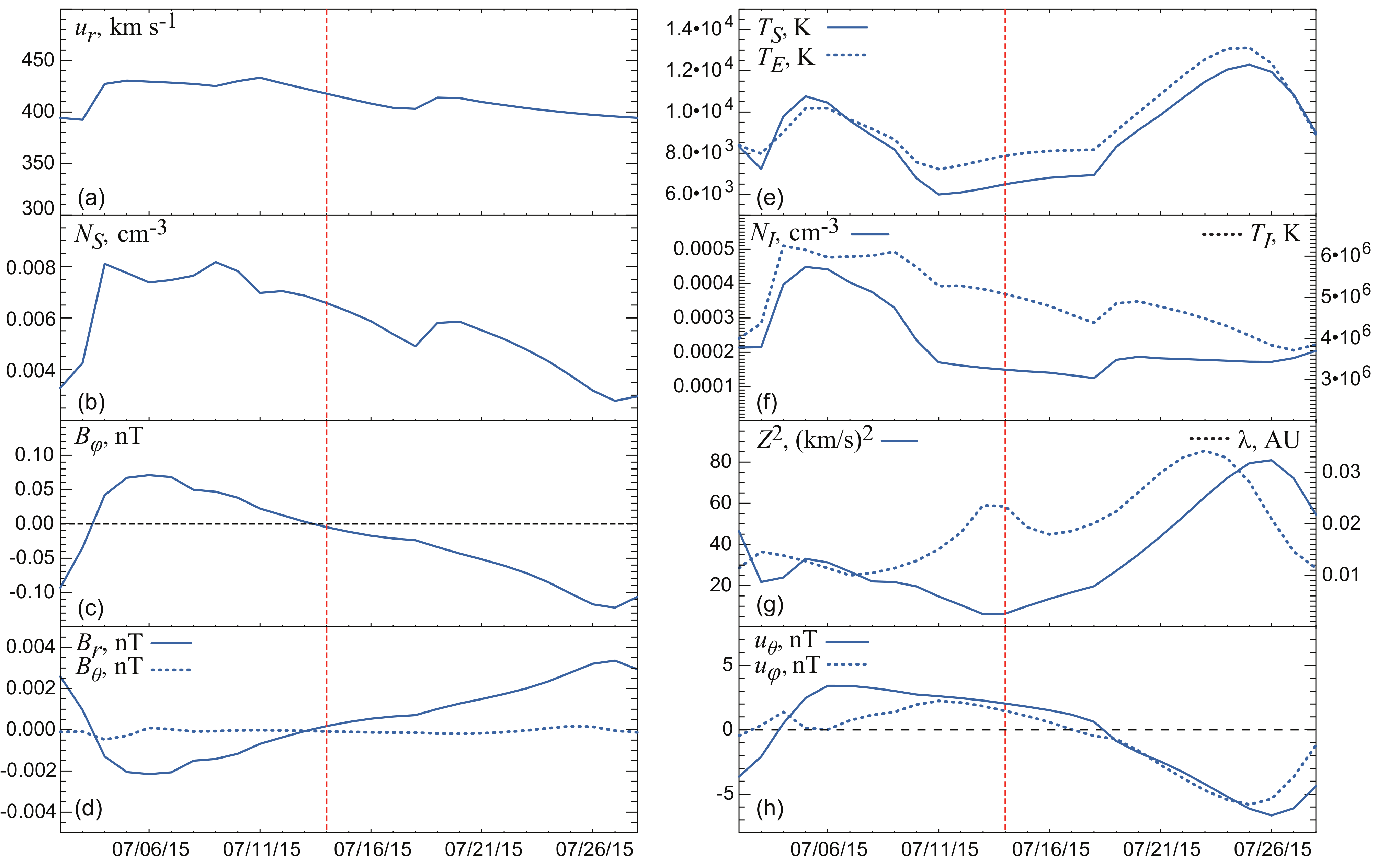 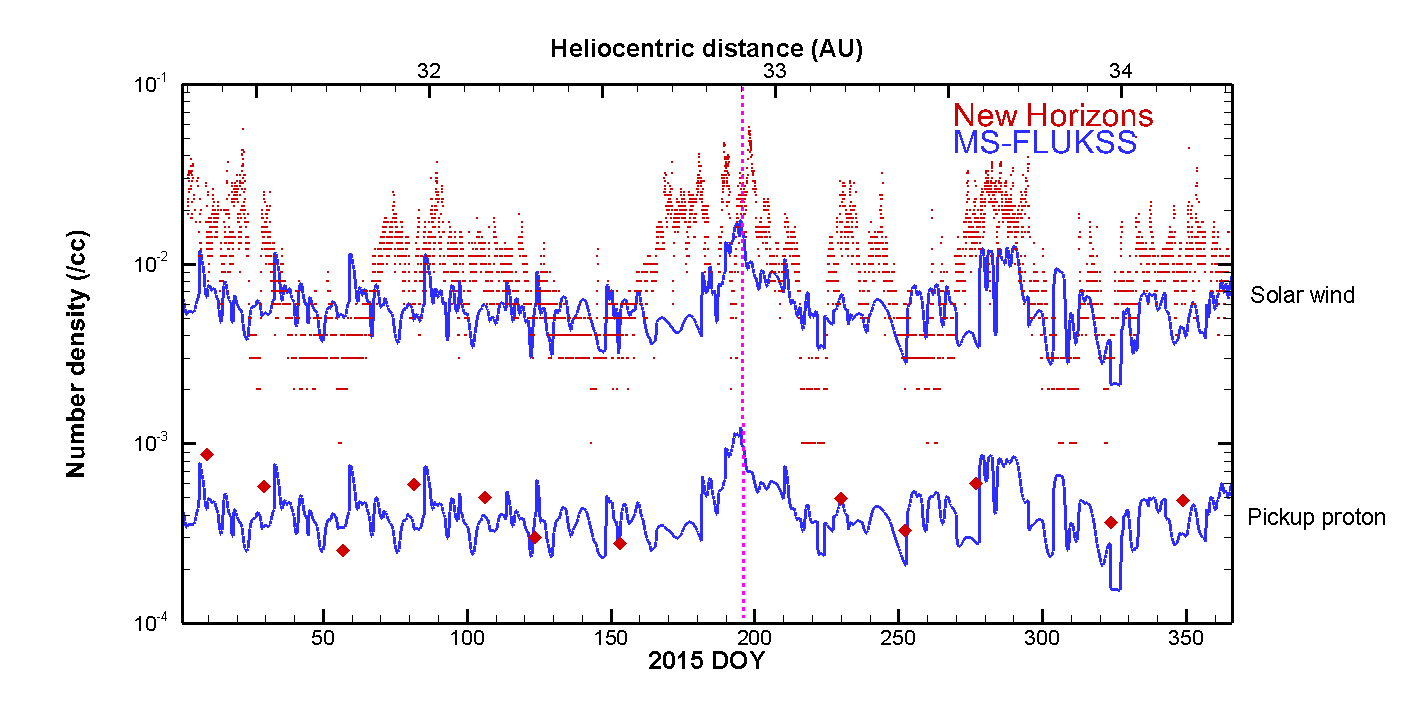 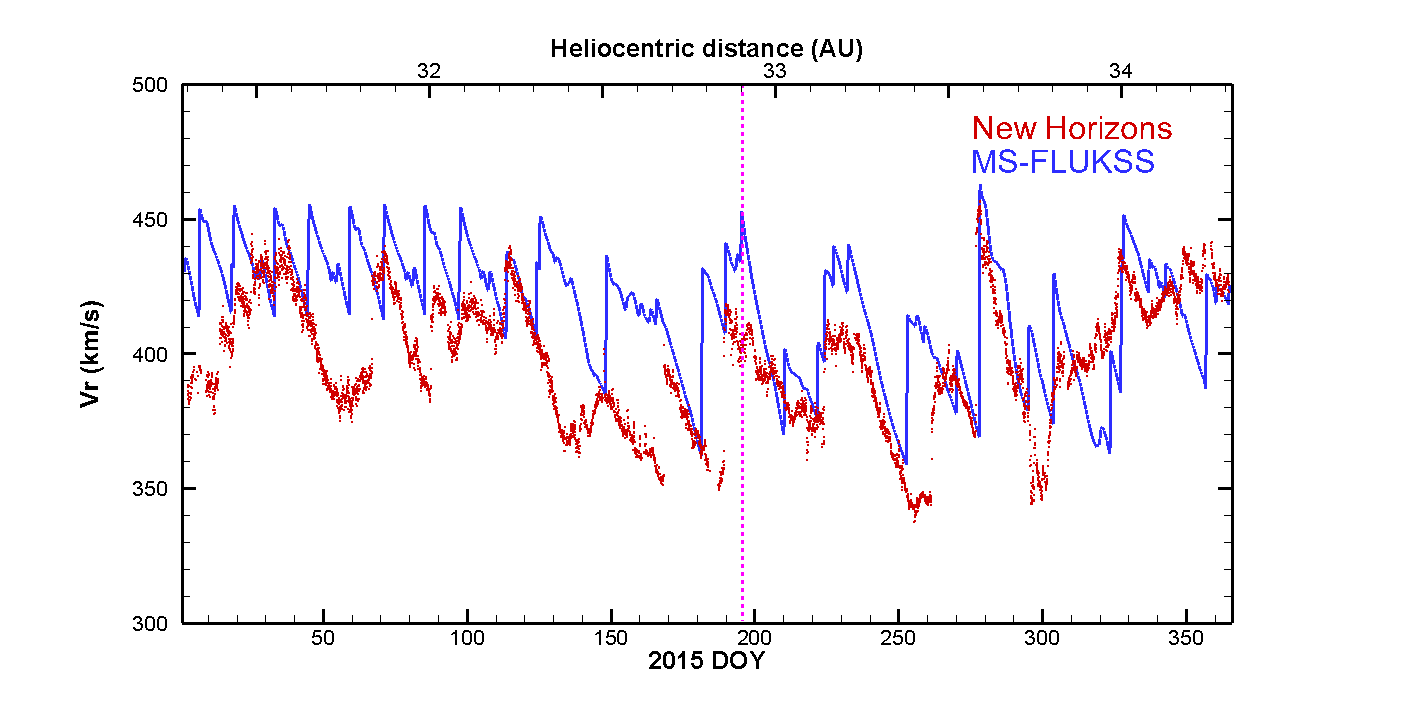 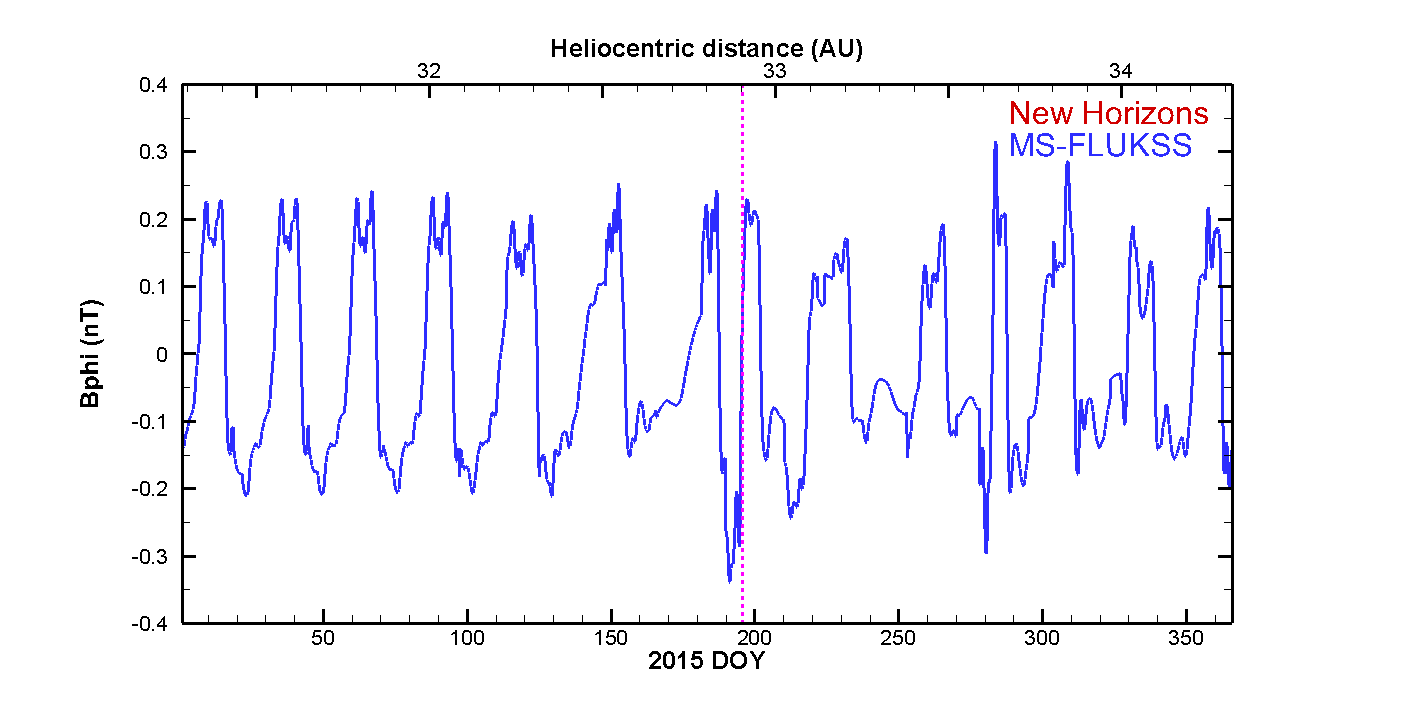 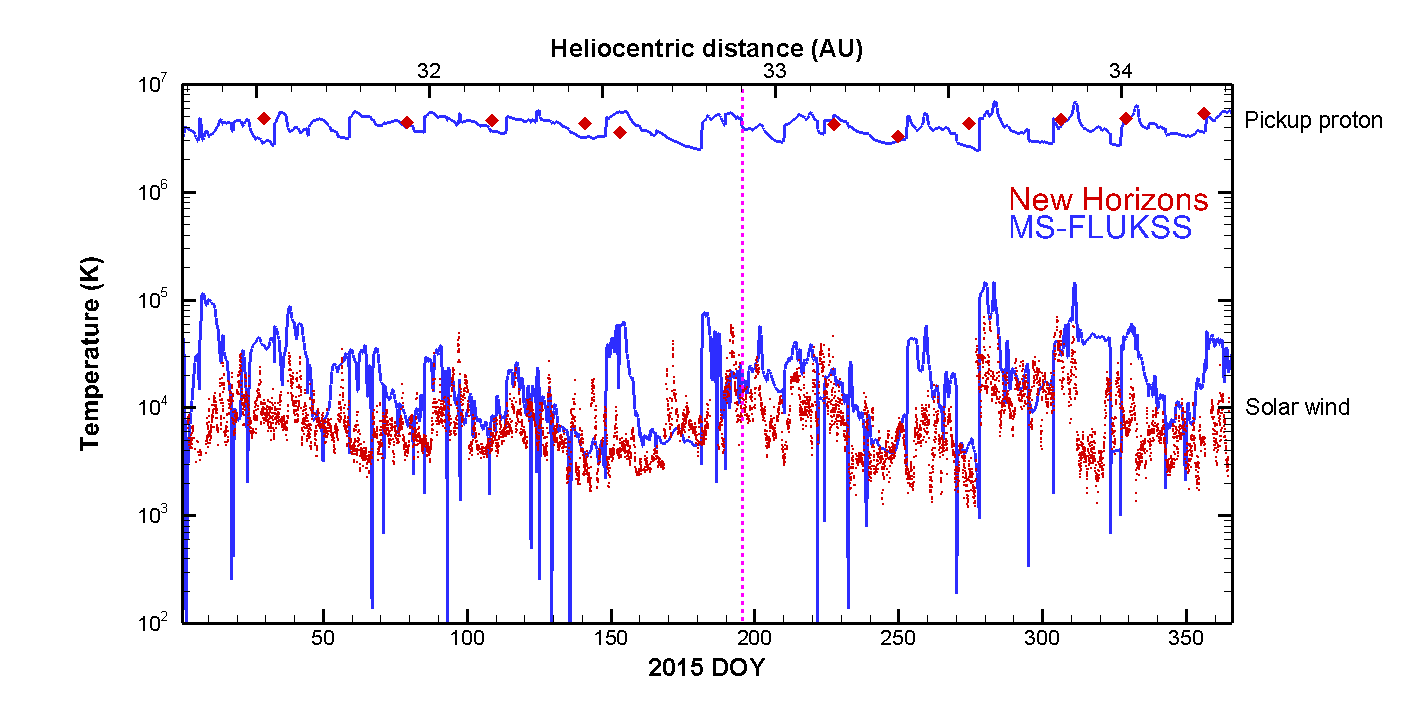 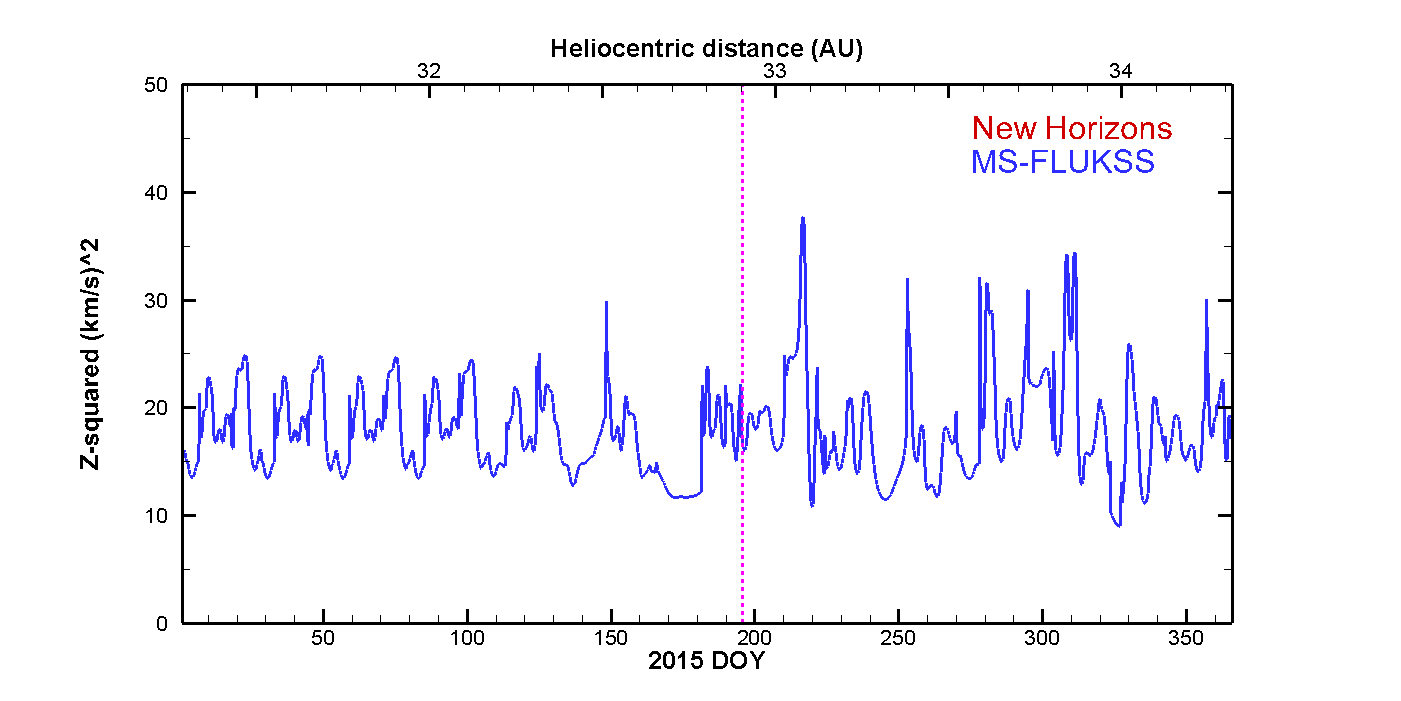 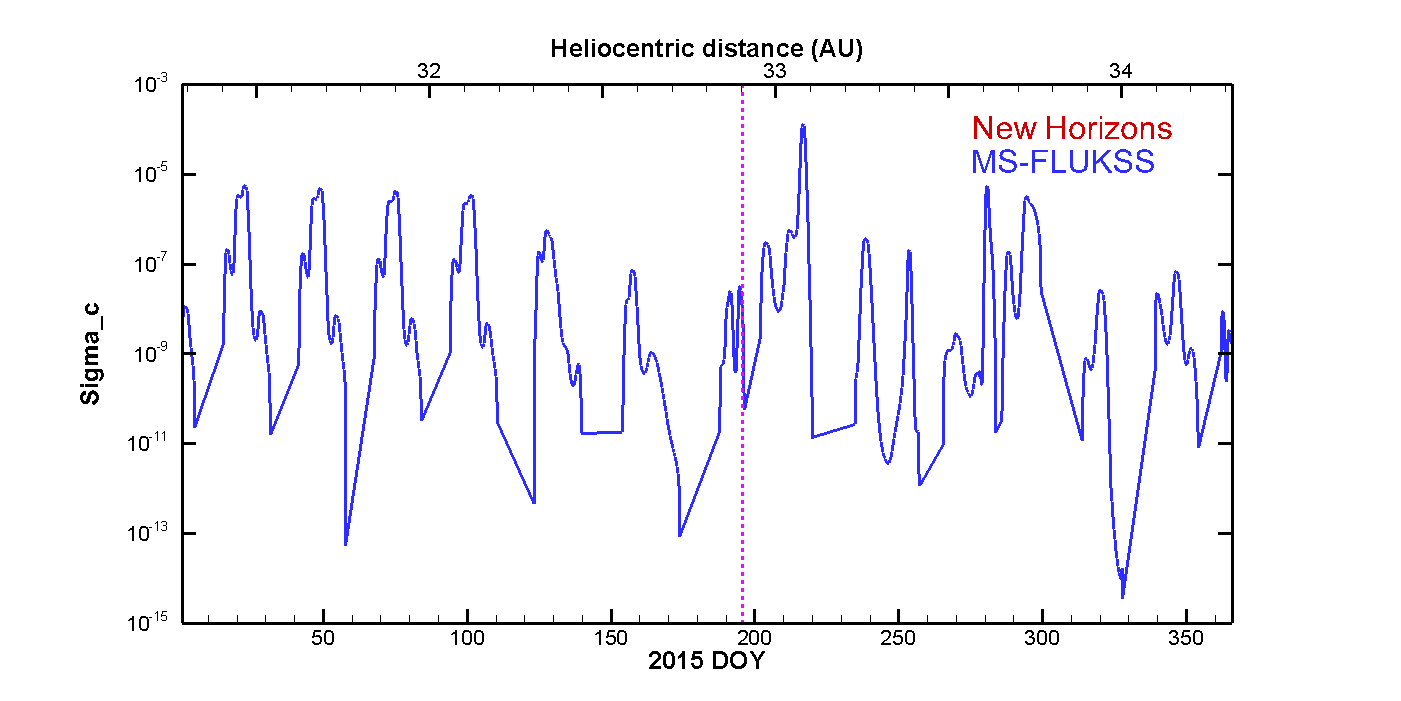 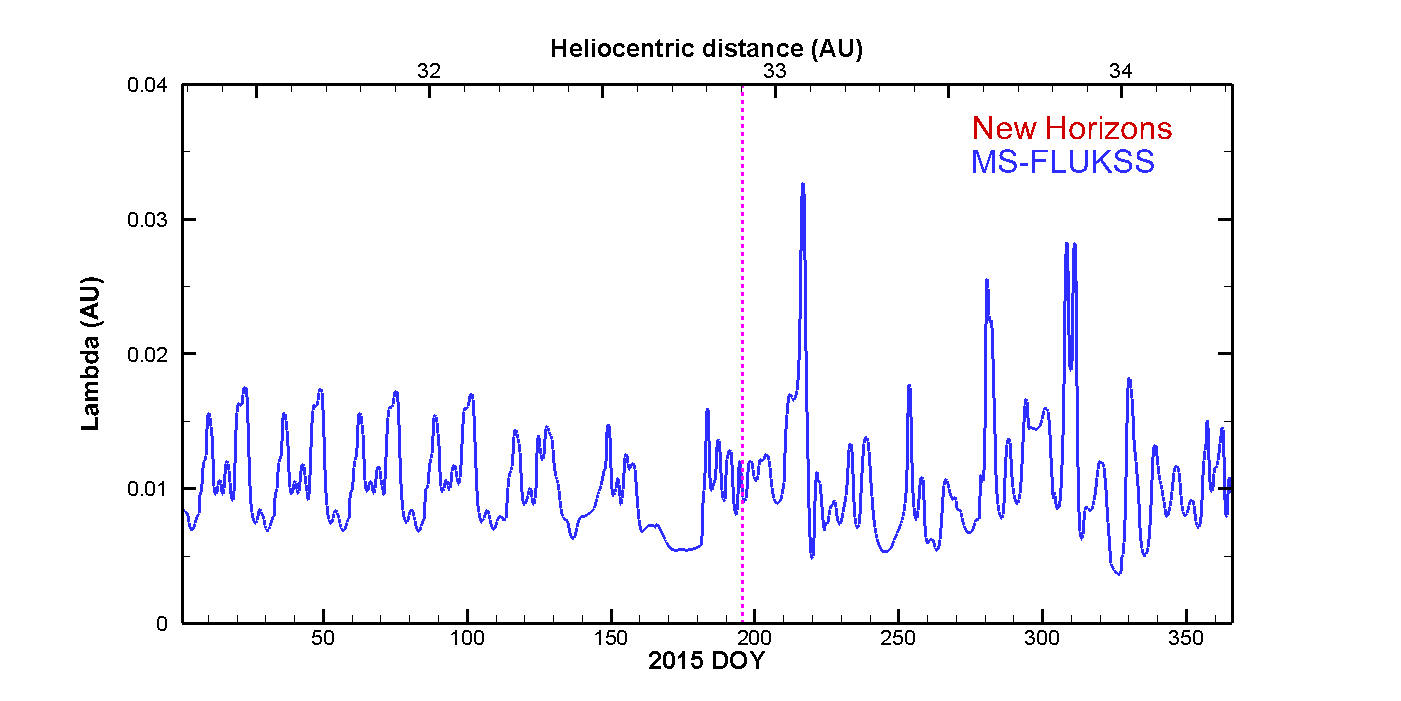 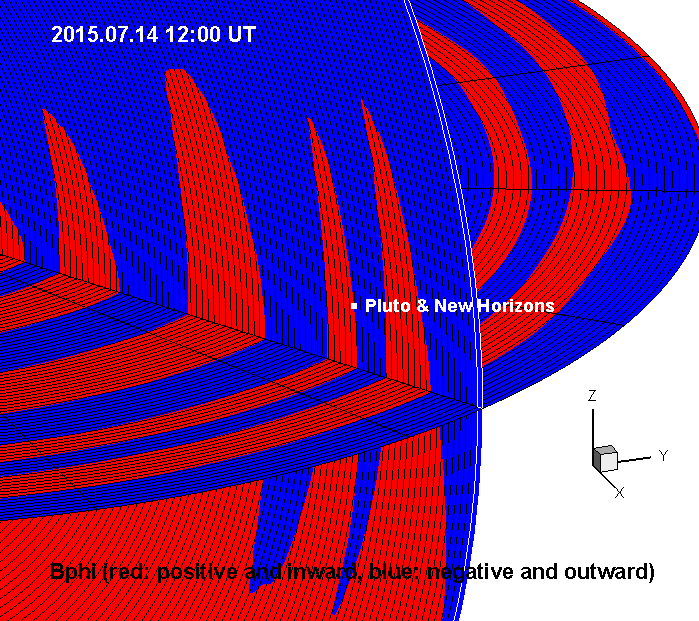 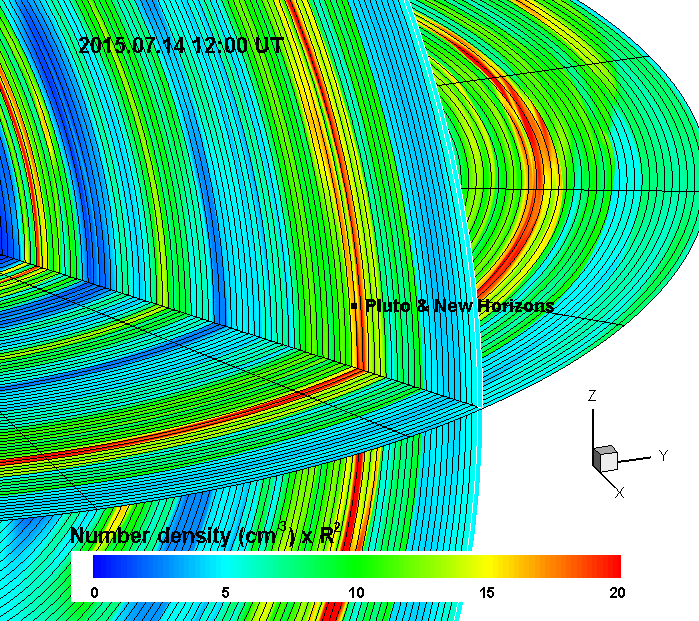 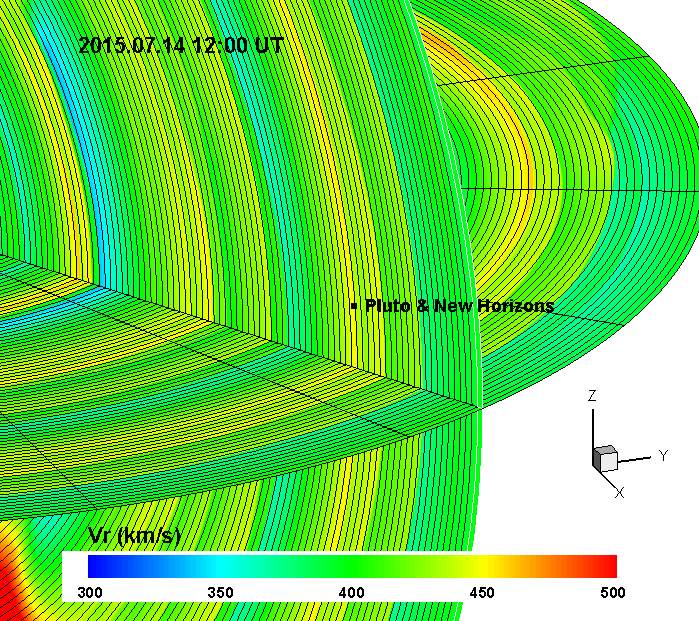 The plots below shows preliminary results from a simulation using the mSWiM code. mSWiM is a 1.5-D ideal MHD model implemented with the Versatile Advection Code (VAC), a general software package designed to solve a conservative system of hyperbolic partial differential equations with additional non-hyperbolic source terms [Tóth, 1996]. The model propagates the solar wind plasma radially outward from the Earth´s orbit at a selected helioecliptic longitude in the inertial frame of reference assuming spherical symmetry.

For a detailed description of the MHD equations, the numerical schemes used and a detailed validation of mSWiM, please refer to the paper by Zieger and Hansen [2008] or visit the model web site https://mswim.engin.umich.edu .

mSWiM has been used extensively by the outer planets community to study solar wind driven effects at Jupiter, Saturn and Uranus. Other applications of the model have included the inward propagation of the solar wind from the Earth to Mercury. See a complete bibliography below.

The simulation uses solar wind conditions measured at Earth as the inner boundary. We most commonly use hourly solar wind plasma and interplanetary magnetic field (IMF) data in the RTN coordinate system from the OMNIWeb database as input, but also use STEREO data as well as ACE data to make predictions in the outer solar system.

The first plot shows the model prediction for radial velocity and number density for the calendar year 2015, at both Pluto and the location of the New Horizons spacecraft. 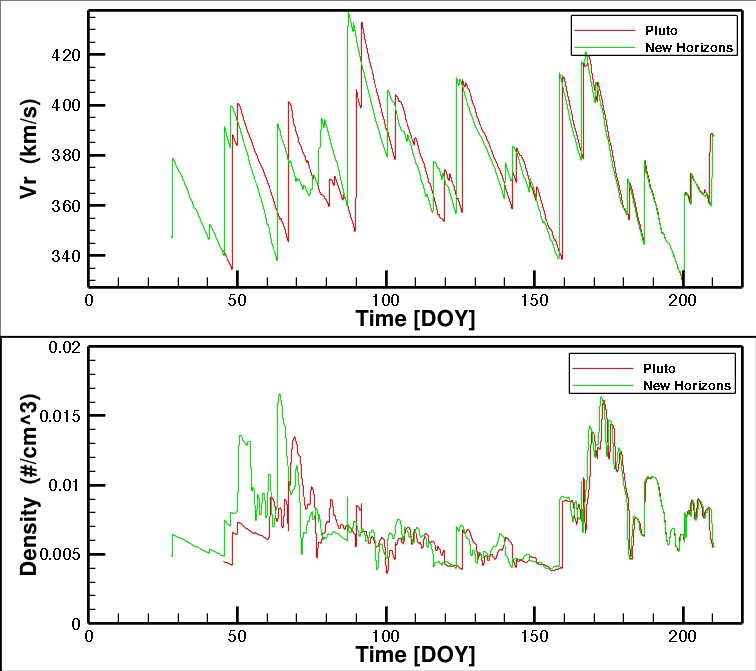 The second plot shows the same quantities as the first plot, but with the time window expanded to show just May to July, ie the time interval around the approach and the flyby at Pluto. 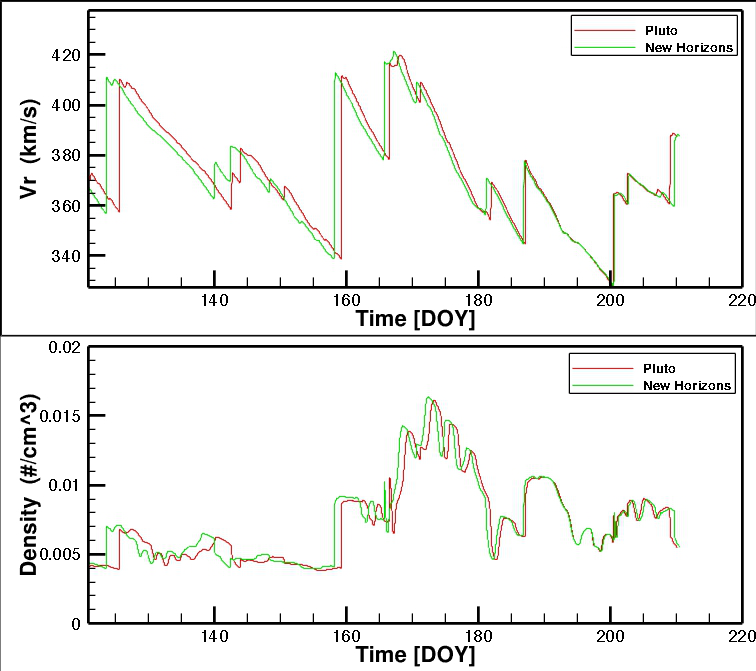 The plots below shows preliminary results from a simulation using the Outer Heliosphere (OH) module of the Space Weather Modeling Framework(SWMF).

The code and the OH module is 3D MHD multi-fluid model. It evolves one ionized and up to four neutral H species as well as the magnetic field of the sun and interstellar magnetic field. For this particular calculation, the code modeled just the solar equatorial plane and two neutral species.

The ions and the magnetic field are driven by OMNI observations at 1AU. The usual trick is used to fill in the full circle by assuming that the solution does not change (much) for a Carrington rotation. The neutrals are driven by an inflow boundary in the negative X direction at 50AU distance. The neutrals are represented by 2 Maxwellian populations (fluids) and the densities, velocities and temperatures at the 50AU inflow boundary are based on previous 3D equilibrium model runs of the outer heliosphere. The model is run in a time accurate mode in the inertial HGI coordinate system. Spherical expansion effects are properly taken into account for the ions and the solar magnetic field. The neutrals, on the other hand, flow parallel with the equatorial plane. The ions and neutrals interact via the collision terms described in the papers by Merav Opher et al (see below).

The first pair of plots shows the radial wind speed in the equatorial plane at the time of closest approach in the left frame, and the solar wind proton temperature in the right frame. The black plus sign is Pluto. 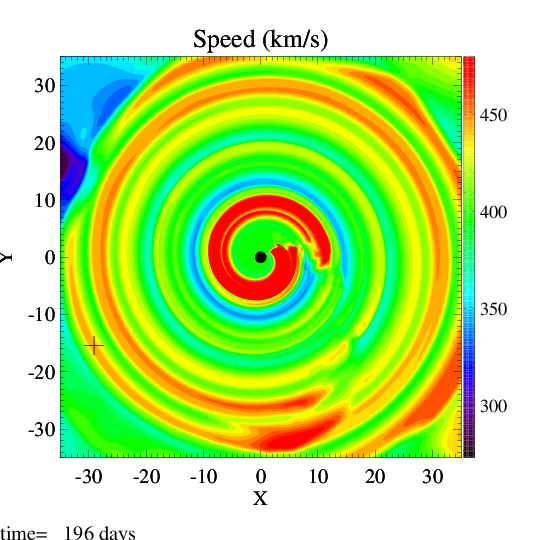 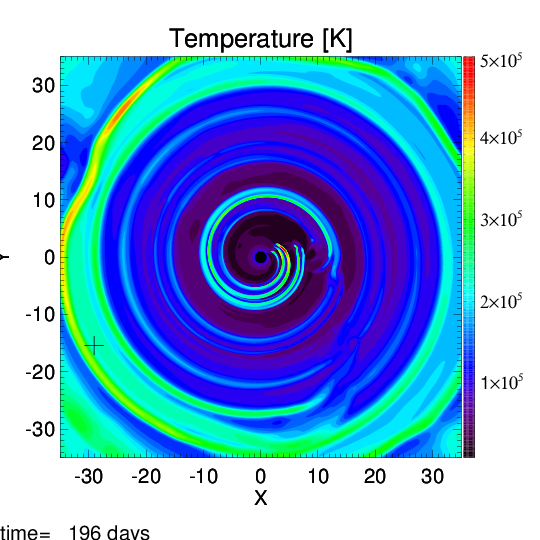 The next set of plots shows timelines of the solar wind number density, velocity, temperature and Phi component of magnetic field as a function of time at New Horizons between May 1, 2015 and August 9, 2015. 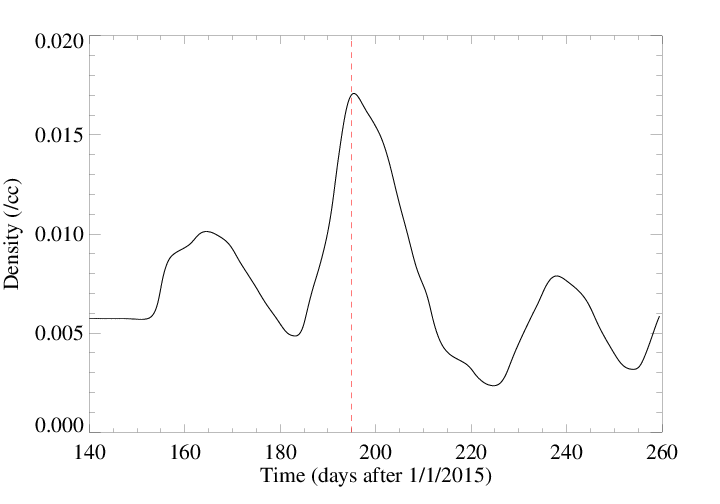 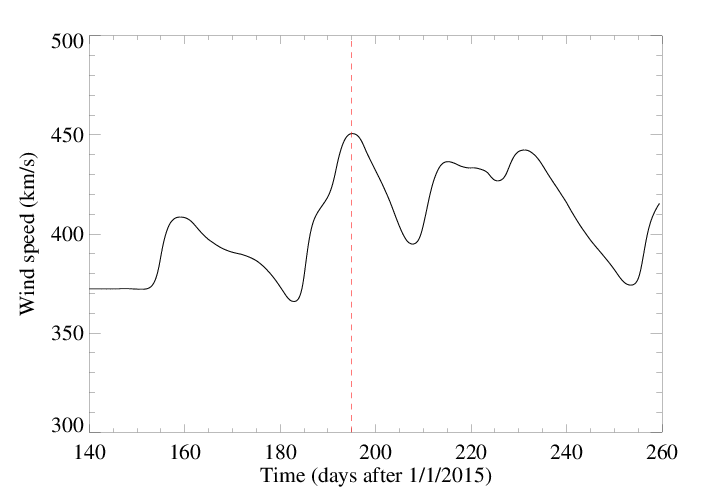 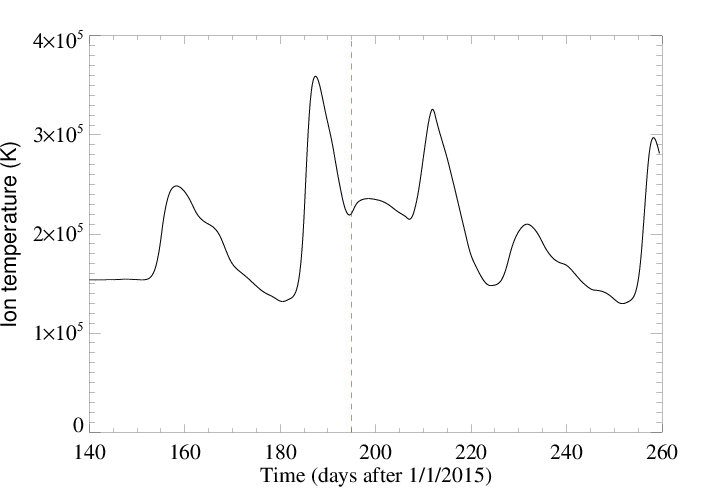 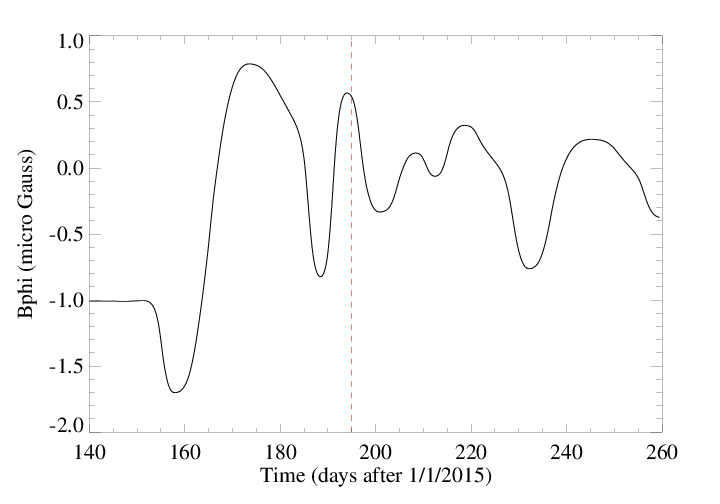 This 2D movie shows the evolution of the solar wind velocity in the solar equatorial plane from January 28 to September 16, 2015. This is in HGI coordinates. Pluto is located at approximately x=-29,y=-15 in this movie.

More information about this model can be found in the following papers:

These plots compare results from all the participating models. The vertical dashed magenta line indicates the time of the New Horizons fly-by of Pluto. 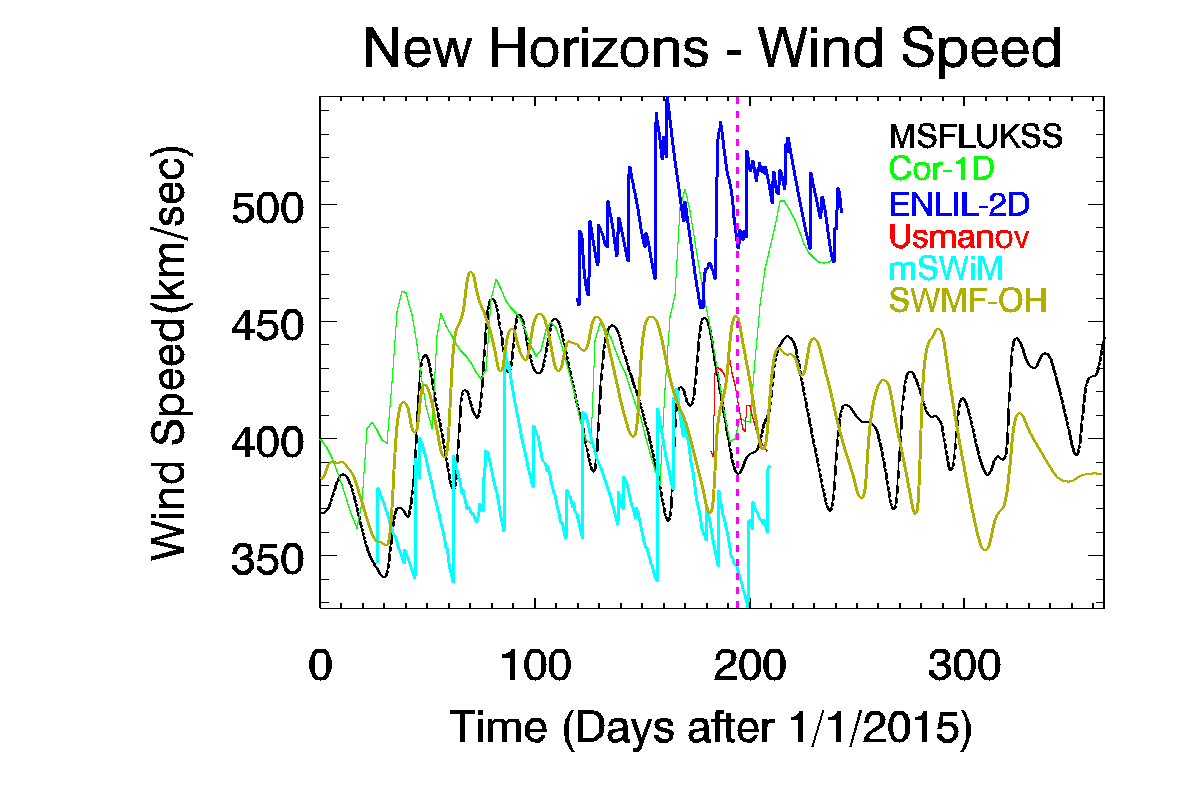 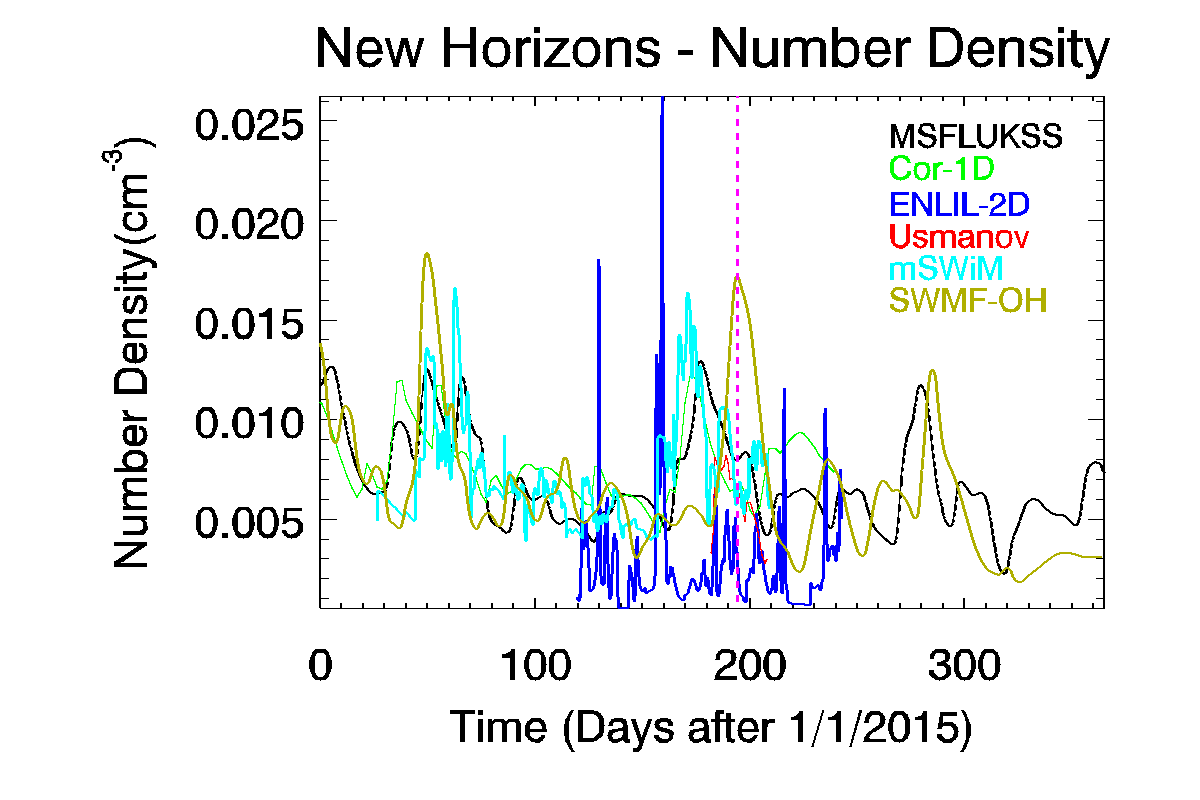 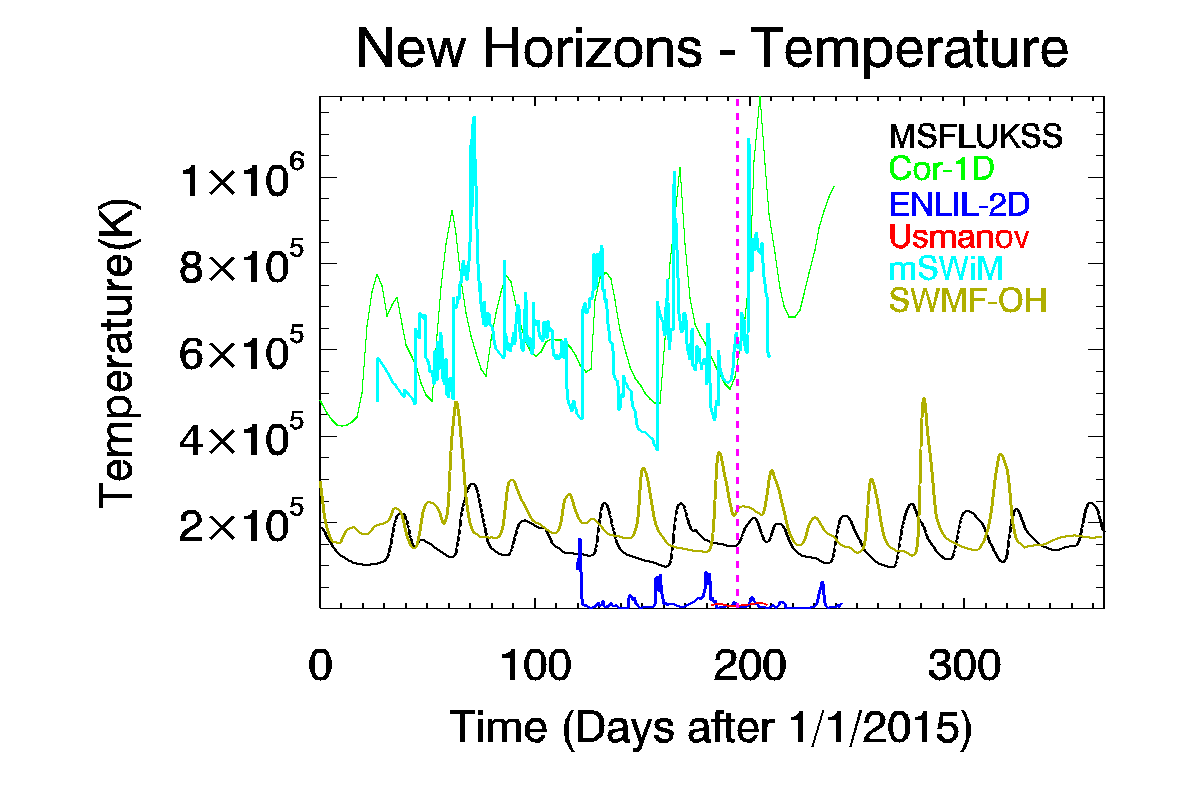 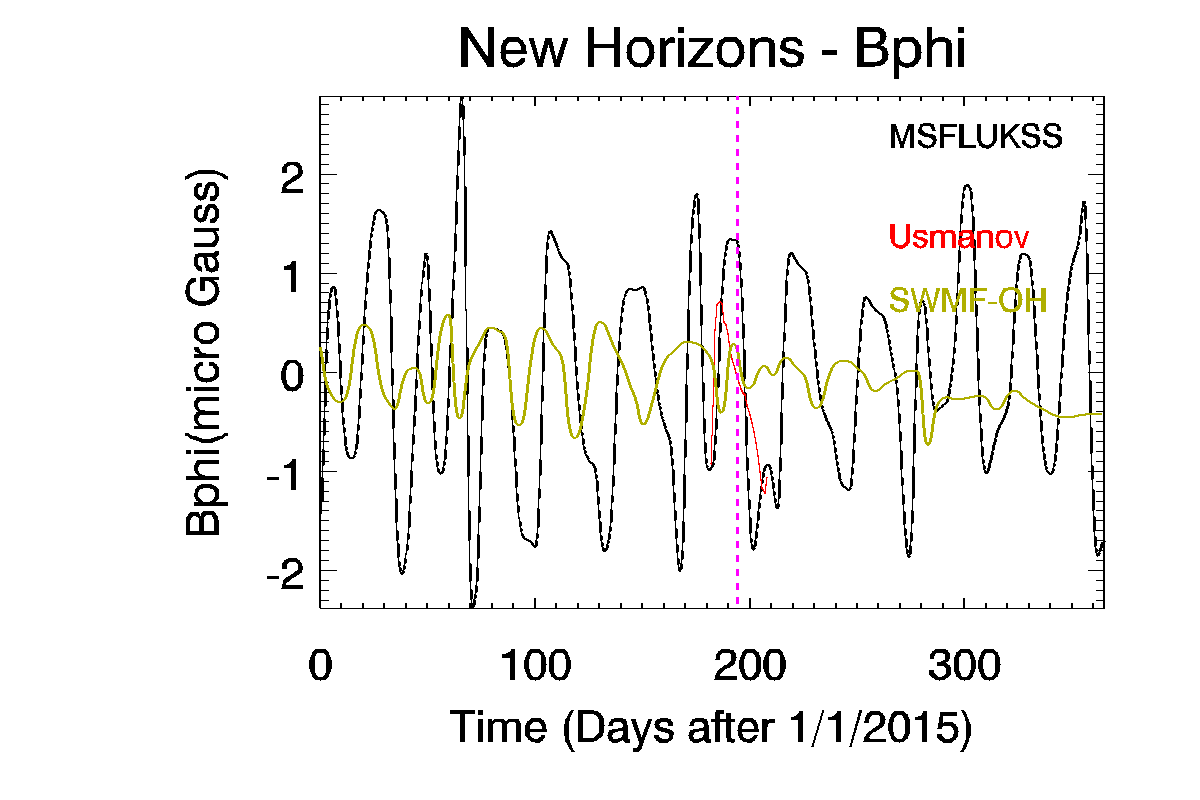